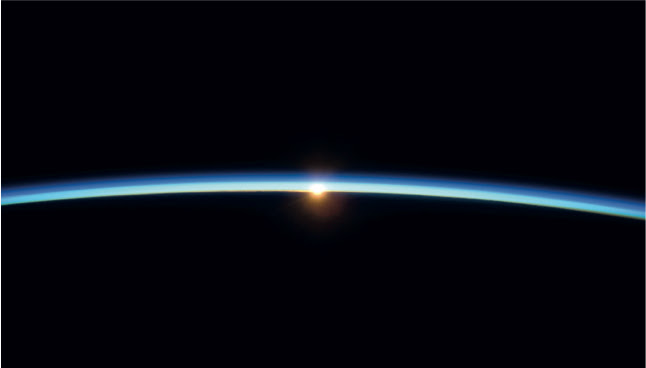 Where does space start? Where does it end? Is it unlimited? Does it have boundaries? How can we define space? A practical, yet precise definition of space is difficult to come up with. Let me give it a try, though: I would say that space includes all regions in the Universe where a free trajectory of a spacecraft, or of any natural object such as a planet, an asteroid or a comet, is possible, with no or with minimum braking force due to a drag-producing medium such as an atmosphere.

Of course, as we are living on the surface of planet Earth, the first question we have is “How far from the surface of our planet does it start?” Is it at an altitude of 80, 100, or 120km? A satellite would not survive even one orbit at these altitudes! So, according to our definition, space must start higher than that, but how high? There is one difficulty here. How long a satellite or spacecraft will stay on orbit depends not only on the properties of the upper atmosphere and on the slow transition to near-vacuum, but also on the characteristics of the spacecraft itself. At an altitude of a few hundred kilometers above Earth’s surface, a small, high-mass object will stay on orbit much longer than a large object of low mass. The shape of the object is also a factor. For a given mass and size, a high-drag object like a slowly tumbling solar array will have a short orbital lifetime, except if located on a very high orbit.

As a matter of fact, the lower boundary of space is commonly accepted as being 100km altitude above the surface of the Earth. This limit is also designated as the “Karman line”: the boundary between aeronautics and astronautics, and above which the air becomes too thin to support aeronautical flight. This definition is accepted by the Fédération Aéronautique Internationale (FAI), which is the international standard setting and record keeping organization for aeronautics and astronautics. So much for a definition of the lower boundary of space.

And now, what about the outer limit of space; where does it end? In fact, nobody knows for sure. I like the idea of a finite Universe, without boundaries but with a finite volume, wrapped around itself in its multiple dimensions. Personally, I am scared at the idea of an infinite Universe, and I am not the only one! (“Le silence éternel de ces espaces infinis m’effraie.” [The eternal silence of these infinite spaces terrifies me], Blaise Pascal, Pensées, 1670).

Although difficult to imagine, a Universe of finite volume with no straight lines and no boundaries is a more satisfactory model. Anyway, for the purpose of this book, it does not matter. The subject we are addressing here is “Our Space Environment”: the portion of space relatively close to us, from a few hundred to a few hundred million kilometers away, including the inner Solar System and the Sun itself. We know, however, that our space environment is also subject, in some of its characteristics, to what happens (or happened) much further away. It is obviously exposed to very cold cosmic background radiation and also to a flux of energetic particles of galactic or even extragalactic origin.

Access to this environment, by means of scientific satellites carrying radio transmitters, detectors, various sensors, and imaging devices, had to wait until the 1950s when rockets were developed and used to carry these payloads outside of the atmosphere and to orbital velocities. An extraordinary and rich new field opened up, first for science and then for practical applications. As a matter of fact, nowadays, the near-Earth part of this environment offers tremendous opportunities for very useful applications in the fields of global communication, precise navigation, and observation of the Earth and of its atmosphere. Also, a short time after access to space was made possible, a number of exploration missions were launched by the Soviet Union and the United States towards the Moon and various targets in the Solar System. Later, other agencies and nations joined this highly successful space exploration program, which now include the United States, Russia, European countries, individually or through the European Space Agency (ESA), Canada, Japan, China, India, and more to come. Last but not least, close to 550 people have ventured into space since the flight of Yuri Gagarin in April 1961, and human space exploration has been, and still is, a rich and fruitful activity serving science, technological development, and peaceful cooperation between nations.

Opportunities and Limits for the Actors

The role played by space-related data and technology in our daily lives has increased dramatically over the past few decades. In fact, it has evolved from being confined to a few fields of scientific research and specialized technologies to a large perimeter of areas and has brought advances in services that directly affect the lives of people across the globe. Historically, because of the prestige linked to the space race and not least due to the high capital costs involved in establishing infrastructures and sustaining this sector, governments have been the main actors. Today, the globalized nature of the space sector has led to increasing complexity. On the one hand, private manufacturers and operators are active in launch services, satellite technologies, and services, as well as in applications derived from space-based infrastructure. On the other hand, more than 60 nations currently implement national space programs, and this number is steadily increasing (see the following figure). A key challenge for both groups of actors is to form coherent and integrated partnerships. An even more important aspect to consider for future partnerships is the growing need for data received from satellites — the demand for these data is growing fastest in Africa, Asia, and South America.

Governments have increased the focus of their actions on paving the way for technological leadership and implementing measures to further international cooperation and competitiveness. Indeed, in regional or global setups, institutional actors focus on the opportunities and challenges they share in their space endeavors to further advance the exploration and utilization of space. There is strong affirmation among governments that space exploration is for the benefit of all mankind and, with this recognition, the goal is to achieve collaboration on projects that are also in line with the partners’ national objectives. Why do spacefaring nations, a number of which enjoy independent access to space, consider it necessary to engage in international cooperation? The answer is straightforward: both competition and cooperation are required for space endeavors to be successful. At the domestic level, practices are clearly aimed at promoting at least a robust national academic and industrial base, which in turn enhances the economic competitiveness of the sector, and beyond.

Present in the daily lives of citizens of any modern state, applications resulting from space activities are also of undeniable use in given sectors of developing countries and in rural areas alike (for instance in telecommunications, telemedicine, precision farming). This trend is set to continue: society’s increased dependency on modern technologies, very often by-products of space-related cutting edge technology, contributes to making space the global business it has become. The business comprises two main sectors, the upstream (manufacturers of space hardware, launch systems providers) and downstream (satellite operators, space-based data products and services) sectors. Many different types of actors, namely institutional, academic, large industrial corporations and SMEs, contribute to the space economy at various levels, with the institutional partner in the driving seat. The legacy from the early days of space activities is that government involvement is still crucial to preserving long-term capacities at scientific and industrial level by covering technological risks. Public investment in civil space activities per year and inhabitant remains rather modest, at around €45 in the United States of America, €30 in France and €15 in Germany.

More specifically, European institutional customers are at the core of European space industry markets. As at 2013, the activity of the European space manufacturing industry had experienced growth since 2005 (Eurospace 2014) and is responsible today for around 40,000 direct jobs in Europe. In certain regions, such as in French Guiana where Europe’s spaceport is located, the ratio of direct/indirect jobs is 1:5 according to the CNES (Centre National d’Etudes Spatiales), the French space agency. The European space industry is used to facing competition, as it is more dependent today on commercial orders than its competitors from other regions. In fact, compared to the United States, where over 90% of the sales of US space industry are made to its government, the European space industry realizes over 40% of its sales with commercial customers, as described in the European Space Agency’s (ESA) long-term plan 2015–2024. It must, however, be highlighted that the European space sector is increasingly under pressure from global competition, with notably new actors, be they private or public. In addition, it differs from its main international competitors in that it is more used to international competition, its share of military expenses is smaller, and synergies between civil and defense sectors are far less developed. Furthermore, unlike in North America, Europe’s downstream satellite navigation and Earth observation markets are still emerging.

The Antartic Treaty: a precursor to the governance of

Space activities raise a fair share of environmental protection-related questions. As discussed, nations are eager to encourage progress in research and the development of new technologies which can potentially create substantial economic impact. Such eagerness, when coupled with policy-making, must take into account a myriad of other issues and the interests of numerous parties. The Outer Space Treaty initially signed by 27 parties and today ratified by a majority of states, seeks to prevent possible damage to the Earth and outer space environment by, for instance, affirming that exploration and exploitation of outer space are to be carried out for the benefit of humankind, and outlawing arms in space.

The basic concept, as well as certain provisions of the Outer Space Treaty, find their origins in the Antarctic Treaty which is considered as exemplary when it comes to international consensus. With the Antarctic Treaty, which entered into force in 1961, the signatories decided to preserve the Antarctic from all territorial claims, preserving it for substantial research and for peaceful purposes only, banning military activities. At the time of signature, 12 nations (Argentina, Australia, Belgium, Chile, France, Japan, New Zealand, Norway, South Africa, the Soviet Union, the United Kingdom and the United States) agreed to consult on matters of common interest and to make decisions by consent of all parties.

Space exploration and utilization have helped us make incredible progress in understanding our natural environment as well as the natural and man-made threats that can affect it. Such progress, often unattainable by individual states working alone, has strengthened the belief that international cooperation is the way forward.