As the rapid pace of urbanization has tilted the balance of the Earth's population to urban places, the challenges of planetary sustainability are increasingly likely to be addressed through efforts to make urban regions more sustainable. The research project emerged in response to an increasingly urgent need to develop analysis and decision-support tools that can assist local and regional governments in coordinating the planning of infrastructure investments and urban development to reduce their carbon footprint substantially, while assuring that their prosperity can grow efficiently and equitably.

To address these challenges, an international research team submitted a proposal to the European Commission FP7 program in 2009, entitled SustainCity.

The dynamic processes of urban development, transport, and environmental impact result from the cumulative results of decisions of individual citizens, households, firms, developers, and governments. Infrastructure plans and investments are coordinated by one set of institutions, often working at a metropolitan scale, while land use controls such as zoning that restrict development outcomes are generally managed by local governments. Thus there are significant mis-alignments among institutions that influence the conditions for urban development, and complex behavioral processes that emerge from largely independent market choices made by private actors. The major challenges faced in developing integrated models that can be useful as decision support tools to design policies to improve urban sustainability include the need to adequately represent the heterogeneity of these agents and their choices, to account for the effects of the externalities generated by their decisions, to represent how their individual choices accumulate to shape metropolitan outcomes, and to realistically represent the temporal dynamics of those impacts without relying on strong simplifying assumptions of market equilibrium.

Most prior work in urban modeling is highly aggregate, and emphasized theoretical formulations dating from the early origins of the field of urban economics, that emphasized analytically tractable mathematical models of the monocentric city form that predominated until the 20th century. These modeling approaches, however, leave much to be desired for understanding and modeling complex, polycentric cities that have become the norm since the mid 20th century. Simulation approaches that emphasize modeling individual choices using a microsimulation approach have emerged in recent years in response to these emerging urban processes and spatial dynamics, and these approaches are now becoming more widely adopted in formal planning processes. The SustainCity project leverages these recent developments in agent-based modeling by using the UrbanSim agent-based land use model (Waddell 2002), the MATSim agent-based travel model (Cetin et al. 2002), and the mesoscopic dynamic traffic assignment model, METROPOLIS (de Palma et al. 1997, Kilani & Lindsay 2005), to form a suite of models that have been integrated and applied to simulate sustainability policies in three case study cities in Europe: Brussels, Paris, and Zürich.

The objectives of the SustainCity project are ambitious and important. The research collaborators who coordinated their efforts for this project span much of Europe and also draw partners from the U.S. The researchers represented among the collaborators draw heavily from civil engineering, but also include demographers, economists, geographers and urban planners. Such interdisciplinary collaboration is an important aspect of a project of such an ambitious scope, and involves many challenges of coordinating across institutions, geographies and disciplines. By involving models and researchers working in both the European and North American contexts, we also had opportunities to reflect on the differences in urban development patterns, institutional process, and cultural norms that might influence the design of models tailored to the European context that is the focus of this project.

Agent-based land use transport interaction modeling: state of the art

Land use transport interaction (LUTI) models try to capture the feedback between land use schemes and transport to improve urban planning. Transport and land use are influencing each other in a dynamic and complex manner (Alonso 1964, Mills 1967, Muth 1969, Anas 1982, Borzacchiello et al. 2010). Accessibility, provided by transport, influences location decisions of developers, firms and households (Hansen 1959, Moeckel 2006). Conversely, land use determines the need for spatial interaction (Wegener 2004, Strauch et al. 2005, Wegener 2011). Hence, modeling processes of the urban system needs an integrated view of the interactions between land use and transport (Wagner & Wegener 2007). LUTI models are taking those interactions into account. They are increasingly used in impact analysis and the evaluation of transport, land use and environmental policies (Lee 2009). They help planners and decision-makers assessing the impact of infrastructure measures and to improve policy and investment decisions.

A framework of urban systems

We can define LUTI models as simplifications of the urban system to do impact analysis and evaluation of policies and planning with respect to defined targets. The main purpose is to understand how land use and transport influence each other and consequently to use the knowledge to explain effects of modifications to the urban system. If we know the sensitivity of households towards a cordon toll, we have a better idea about the consequences on the city center's housing market. The effects can then be evaluated with respect to defined targets to improve planning.

The object being modeled with LUTI models is the urban system. It can be framed in seven subsystems depicted in the following graph (gray boxes).

The natural environment, legal regulations, and infrastructures are the stage on which economic actors (persons) or actor groups (households, firms) perform their activities. The natural environment comprises all elements which would also exist without human beings. It is the basis for human activities and in itself an extremely complex subsystem. The anthropogenic parts - which result from human activity - of the urban system are embedded in the natural environment. The legal regulations and infrastructures are the result of societal decisions, e.g. voting on infrastructure projects or approval of land use plans. The actors' activities constitute the system of land use. Their patterns in space and time emerge from the decisions of the socio-economic actors when and where to perform an activity. The actors, or agents, consider the conditions of the underlying subsystems for their decisions. These modify again the conditions of the subsystems which means that feedback cycles are in place. The one between land use and transport is discussed in more detail below, depicted in the next graph. 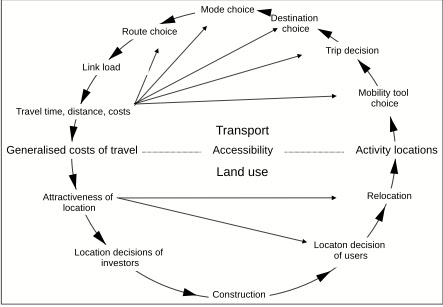 The activities can be seen as decision chains (depicted as rhomboids). Not all decisions are taken equally often. Decisions related to travel are taken rather spontaneous every day whereas the decision on constructing a house is taken much less frequently. Even less frequent are group decisions, e.g. democratic decision processes. Hence, affected subsystems evolve with different speed. This has implications for the modeling. We can distinguish:

The activities determine the evolution of the urban system. The resulting processes are related to each other, e.g. the construction of a new residential building gives households new possibilities to reside. However, not all processes are of the same kind. Some are decision processes while others are of a physical nature. Also, the decision processes can be different. One example is the distinction of individual and collective decision making.

In the firsz graph we can recognize two main parts of the anthropogenic urban system considered in LUTI models. The spatial distribution of activity places constitute the land use system. This system consists of specialized places which facilitate certain activities like housing, working or traveling. Since specialization often leads to spatial separation, traveling arises as necessity. From this point of view the transport system is the subsystem of land use which relates activity places with each other. Traveling persons and transported goods on transport networks constitute the transport system. The relevance of the transport system within the land use system is the feedback cycle shown in the second graph.

A location's attractiveness depends on how easy it is to reach. Investors anticipate the attractiveness for potential users and are consequently producing new facilities in places with high accessibility. The newly provided facilities get eventually used by the inhabitants of the urban system. Since the performance of transport infrastructures depends on capacity and usage, the attractiveness of a location may decrease if it is more frequently visited.

Accessibility is a central measure in this context. Generally, it is a measure of attractiveness of a location. However, there are various definitions in a number of fields (Geurs & van Wee 2004) which shows the generality of this concept. The important aspect in the context of LUTI models is that accessibility measures how opportunities / facilities are related via the transport network to one another. The accessibility measure used should thus be sensitive to variations in generalized travel costs and spatial distribution of facilities.