Our present civilization is rooted in high energy consumption. In order to maintain the same quality of life in Western countries and to improve it in developing countries, the world of tomorrow is likely to have an even greater need for energy. However, most of these needs are currently met by fossil energy sources, which are unsustainable on the long term, since their combustion emissions are the main contributors to a global warming threatening our society. Moreover, they have a limited availability.

Therefore, cleaner and more renewable energy sources will have to be developed in the next decades to achieve sustainability. However, we must ensure that these new resources and technologies will not simply shift the impacts on the environment and create new ones. Many candidate technologies and resources currently compete or are still at the development stage in the field of renewable energy. Examples include the development of biofuels for mobility and deep geothermal resources for heat and electricity production. When assessing the environmental impacts of these new technologies, the full life cycle from cradle to grave must be accounted for, since the emissions associated with such systems often do not occur during utilization, but instead during the production or the disposal phases. Life Cycle Assessment (LCA) is a methodology that has been developed mainly in the last two decades to assess the environmental impacts of products, services or systems. However, it is important for emerging technologies using renewable energies that LCA is integrated at the conceptual design stage, since it is easier to take mitigation measures for impact reduction at this early stage than when the technology is already commercialized. In this way, LCA can really be used as a design tool and allow for identifying promising technologies that are also environmentally beneficial and economically competitive.

During the last decades, the massive use of fossil energy resources to satisfy the needs in heating, electricity and transportation in developed countries has caused the release to the atmosphere of important quantities of previously sequestrated carbon. If the current trend continues, extending to the developing countries, humanity will face a global climate change in the next century. The perspective of mitigating this threat and the awareness of the limited availability of fossil resources has lead to a growing interest in developing large-scale alternatives based on renewable energy resources.

In Switzerland, this need has even been strengthened since the recent decision of the Federal Council to abandon nuclear power by 2034. As defined in its national energy strategy for 2050, the new energy policy is based on the concept of the 2000W society and 1 ton of emitted CO2-equivalent per inhabitant and per year (Swiss Federal Council (2011)). A 2000W society means that the yearly energy consumption per capita, including all the sources of energy necessary to supply the required services such as heating, electricity and transportation, should not be higher than 2000W when this consumption is calculated as an average power requirement. However, the current energy consumption per capita in Switzerland is far from this objective, with a primary energy requirement of around 4600W per inhabitant. It remains mostly based on fossil energies, which results in around 7 tons of CO2-equivalent per inhabitant and per year.

In order to reach these objectives, the Swiss energy policy targets simultaneously an increase in the energy efficiency and in the substitution of fossil energies and nuclear by renewables, still representing a minor share of the total energy consumption, except for hydro-electricity. Thus, the potential for geothermal energy, photovoltaics, biomass and wind energy remains nowadays largely underexploited. In the future, several emerging technologies could contribute to increase particularly the share of geothermal energy and of biomass in an efficient way. In particular, the combined production of electricity and heating by the exploitation of deep geothermal resources as Enhanced Geothermal Systems or the production of synthetic natural gas by the thermochemical conversion of biomass appear to be promising. Nevertheless, such technologies are for the moment still at the stage of pilot-scale projects and several technological developments are necessary to make them economically competitive.

However, the preliminary evaluation of such technologies before they enter the market should not be limited to economic and efficiency criteria. Indeed, it should be ensured that their overall environmental balance is beneficial not only with respect to their fossil competitors, in terms of greenhouse gases emissions but also for other environmental impacts, such as eutrophication, acidification, toxicity or land use aspects, for example. To conduct such an assessment, it is necessary to use a so-called ’life-cycle’ based approach, since the major impacts from renewables may often not only occur during the use phase, but also during the production phase – the ’cradle’ – or the disposal phase – the ’grave’.

In order to assess the environmental performance of such emerging technologies in the field of renewable energy, Life Cycle Assessment (LCA) is currently used as the state-of-the art method. Also sometimes termed as Life Cycle Analysis, LCA is a quantitative methodology for assessing the environmental impacts of a product, a service, or a system, related to its function and accounting for its overall life cycle.

The original computational framework used to implement the methodology aims at structuring and organizing the information in order to represent the possible interactions between the different components to be considered in the energy system design. The optimization problem aims at calculating the configurations of the system that minimize simultaneously the non-linear costs, impacts or maximize the thermodynamic efficiencies. It is therefore by essence a Mixed Integer NonLinear Programming (MINLP) multi-objective optimization (MOO) problem. It is solved following a two-stage decomposition methodology with a master problem and a slave sub-problem, and is described in the following figure, with the original parts displayed in black.

A superstructure including the different technological options is built and the thermo-economic models of these components are developed. In a first time, flowsheeting software is used to calculate the energy and mass flows for the different models, for a given set of operating conditions. The resulting energy flows are then used in a second time to generate the process integration model, which optimizes the heat recovery and the combined fuel, heat or power production, depending on the problem to be solved and on the considered technology. This is done by minimizing the operating cost while computing the energy integration. The process integration model is solved as a Mixed Integer Linear Programming (MILP) sub-problem, which decision variables are the utilization rates of the different technologies in the superstructure. It is submitted to the constraints of the heat cascade. Eventually, the thermodynamic states and flow rates of the energy-flow and energy integration models are used in a post-calculation phase to size the equipment, estimate the cost and evaluate the performances of the process configuration. Combining the operating performances with the investment allows for developing economic and thermodynamic indicators that can be used at a master level to realize a multi-objective optimization. A set of decision variables addressing technology choices and operating conditions of the process and utility system is provided for this. The multi-objective MINLP master problem is then solved using an evolutionary algorithm.

In its original form, the performance evaluation is limited to an economic model that rates the equipment in order to meet the thermodynamic design targets. This computational framework is extended to systematically include the environmental life-cycle performance indicators with respect to the detailed process design in the performance evaluation. In analogy with the economic model, it exploits the flowsheeting and the energy integration results – i.e. material and energy flows, equipment sizes – to calculate the life cycle inventory (LCI) of emissions and extraction flows of single substances associated to the process equipment and its operation. It is illustrated by the red part on the previous figure.

As stated by the ISO norms, the LCA consists in four mandatory stages: the goal and scope definition, the life cycle inventory, the impact assessment and the interpretation, this fourth stage being as well necessary during all the other stages of the LCA. During the goal and scope definition, the objectives of the LCA are stated, the boundaries of the considered system are set, and the functional unit (FU) is defined. This functional unit is related to the function of the system and represents the reference quantity for every element considered in the system or crossing its boundaries. In the second stage, the life cycle inventory (LCI), all the emissions and extractions of single substances involved in the life cycle of the considered system are quantified and summed in a vector of substances, considering the different elements of the LCI:

where Emj,i is the emission of the elementary flow i for the LCI element j and FUtot is the total functional unit quantity involved in the life cycle of the considered system. The total quantity of an emission or an extraction is then calculated by:

where nj is the number of LCI elements.

In the third stage, the impact assessment, these single substances are aggregated in a reduced number of impact categories – midpoint or endpoint – having an environmental significance. This is done by using a matrix, termed as an impact assessment method, which contains the weightings for all the substances considered in the LCI:

where wl is the factor used for the normalization and weighting of the different impact categories.

Guidelines for integration in system design

The developed general methodology for the construction and the integration of the LCA model within a thermo-economic model complying with the ISO norms is depicted in the following figure. It comprises the four mandatory stages of a LCA. The parts of particular importance to link the LCA model with the process design and configuration are displayed in black. These developments in the methodology concern mainly the Life Cycle Inventory stage and are discussed in details in the following subsection. 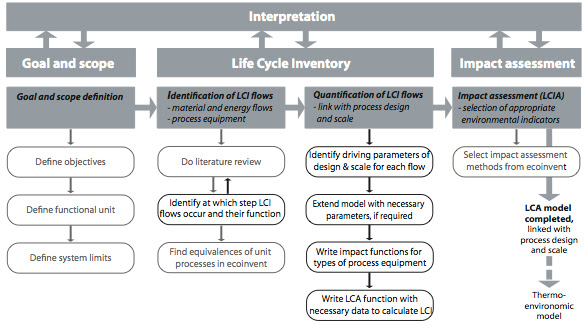 While listing the LCI flows through the system boundaries, it is crucial to identify to which process units of the superstructure the flows are linked. This is necessary because they are then mathematically linked with the thermo- economic model. The scaling of impacts due to the changes in operating conditions and to the size of the process equipment is therefore accounted for. A LCA function including all the LCI flows and the impact due to process equipment allows for calculating the whole LCI of a given process configuration. The ecoinvent® life cycle inventories database is used to find equivalences for all LCI elements and impact assessment methods. The use of such a database allows to account for the induced off-site emissions.

The defined system is taken as a basis to identify the different material and energy flows of the inventory. Their associated life-cycle elementary flows of emissions and extractions are then added to each other. Since the LCI database proposes aggregated datasets for unit processes, it is not necessary to calculate individually each single emission or extraction for all the LCI elements. The emissions and extractions vector of the elementary flows for each LCI element is calculated by: